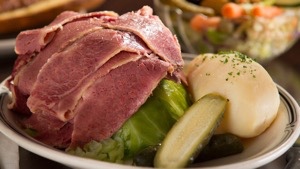 With St. Patrick's Day upon us we can count on local pubs and bars to serve green beer, shamrocks will be plastered everywhere, and those not wearing green can expect to get pinched. The celebration won't stop there, however. Corned Beef is evidently the official food for St. Patrick's Day, and who am I to ignore this tradition. I LOVE Corned Beef.

Start with one of LA's Best Corned Beef Sandwiches.

Right up the street from Universal Appliance and Kitchen Center's Studio City location is Zagat rated Art's Delicatessen and Restaurant. They've been right there on Ventura Boulevard for nearly 60 years. Here's what Zagat had to say:

On the Studio City scene since 1957, this “no-nonsense”, family-run deli doles out the obligatory “sky-high” sandwiches that staunch supporters swear are “better than bubbe's”; “old-fashioned” booths and “fast”, “snappy” waitresses lend it a bit of “NY style”, though critics kvetch it's “a little too pricey for what you get.”

Eater.com recently rated 18 Excellent Corned Beef Plates in Los Angeles and Langer’s topped the list at #1. Right on the corner of Alvarado and 7th St. (across from MacArthur Park), Langer's has been an L.A. landmark since 1947.

The sandwich is so popular that Langer's even has a Pastrami by Air Fedex special. No matter where you live, Langer's Pastrami is only a Fedex flight away! But we're not here to talk about Pastrami – it's CORNED BEEF time. Just look at this fantastic Corned Beef and Cabbage plate from Langer's. Where will YOU be on Saint Patrick's Day? Wherever you choose to enjoy your Corned Beef, stop by one of the two Universal Appliance and Kitchen Center to explore the great selection of major appliances and plumbing fixtures.