Celebrate the Fourth of July with made in USA Appliances

Home Celebrate the Fourth of July with made in USA Appliances

Celebrate the Fourth of July with made in USA Appliances

Good News for Buyers of Made in the USA Appliances

Get US Brand Appliances at Universal Appliance and Kitchen Center

If you are looking forward to the 4th of July holiday season with all the attending appliance sale events, you might think about buying American, and you might be surprised to find out that there are many good choices of high quality US brands made in the USA. Below is a blog we published last year detailing your options.

It might be interesting and worthwhile to look at the landscape of appliance brands and manufacturing to identify the brands by nationality and by where they are manufactured. In other words, which brands are “American” brands and what is manufactured in the U.S. By the way, we mean “made” or “manufactured” to also include assembly. Most manufacturing facilities today are primarily assembly factories where parts are attached to a chassis. Though listed on the U.S. stock exchange, GE is a true multi-national, doing business all over the world making and selling everything from jet engines, to nuclear power plants, to major appliances. They are much less of a factor in world wide appliance sales than in the U.S. GE outsources to other manufacturers and does joint ventures for quite a few of their U.S. appliances. They have recently expanded their U.S. production and have begun making new french door refrigerators at their Appliance Park facility in Louisville, Ky. Estimates are about 50% of its U.S. appliance sales are manufactured in the U.S.

Electrolux is the second largest appliance manufacturer in the World. Headquartered in Sweden and listed on the Swedish stock exchange, they sell in the U.S. primarily under the brand names Electrolux, Frigidaire, and Icon. They have recently closed a couple of U.S. facilities. Though they still have several factories in the U.S. they also bring in major appliances from Mexico, Asia, and Europe.

BSH is a German held company (Bosch – Siemens). They sell appliances in the U.S. under the brand names Bosch, Gaggenau, and Thermador. Some are made in the U.S.

The above list covers the “Big 4” (Whirlpool, GE, Electrolux, BSH) of full line major appliance companies selling in the U.S. We should probably add the Korean firms, Samsung and LG (Lucky-Goldstar) to the list. Most of the Samsung and LG products sold in the U.S. are built in Korea.

The balance of US appliance sales are from companies that are niche or not full-line. Viking Ranges, Sub-Zero Wolf, and Dacor are stalwart high-end U.S. brands that also manufacture nearly all of their products in the U.S. There are many specialty U.S. manufacturers such as Scotsman, U-line, and others. Haier is a Chinese brand that sells some low priced appliances made in China.

If you are interested in finding out more about major appliances call or visit the experts a Universal Appliance and Kitchen Center. 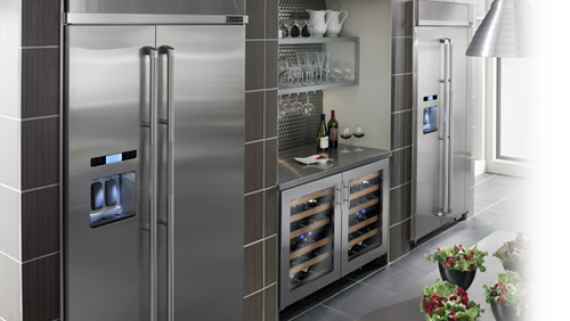