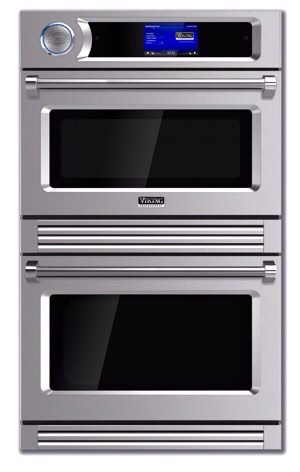 We’ve written before about Viking’s Turbo Chef oven. It’s probably the first new technology in speed cooking for the home since the microwave oven. The air impingement technology is used widely in commercial applications by Viking’s parent company, Middleby. However, this will be its first *serious launch for home use by a full-line major appliance company. The Viking Turbo Chef oven uses traditional radiant heating, combined with convection, microwave assist, and powerful Airspeed Technology™. Using patented jetplates on the top and bottom of the oven heated air is forced over the food at various speeds helping the food to cook up to 15 times faster than conventional ovens. How does that translate? Well, a 12 lb. turkey will cook in the Turbo Chef in only 42 minutes; 20 spears of asparagus in just 45 seconds.

The technology used in Viking’s Turbo Chef Oven has been perfected, and in use commercially for years. If you’ve ever stopped by Starbucks for a breakfast sandwich or had a hot Subway sandwich, chances are they were cooked using Turbo Chef built ovens.

For availability and pricing on the new Viking Turbo Chef or other major appliances and plumbing fixtures, contact the professionals at Universal Appliance and Kitchen Center today.

*Speed Cooking/Air Impingement Technology. Approximately 15 years ago, Jenn-Air and Thermador each put their toes in the water with new speed cook ovens. Jenn-Air’s Acellis 5XP Oven was launched and then pulled off the market in a matter of months in early 2001. In 2002 Thermador’s Jet Impingement Oven was touted at trade shows, but never made it to showroom floors. Past and Present Appliance Innovations

KBIS and IBS to Showcase New Appliances and Plumbing Fixtures